Mr. Stephen J. Seneca, a local businessman and former mayor, offered to build the Havre de Grace Methodist Episcopal congregation a stone edifice for worship, provided they would install heating, lighting and furnishings. The offer was accepted and the cornerstone was laid on October 22, 1901. The present church building was completed and dedicated on June 8, 1902. The church was built using Port Deposit (Maryland) granite in a modified Gothic design. The Port Deposit Granite (technically "Random Ashlar Gneiss") from which the church was built came from the quarry in Port Deposit across the river.

The quarry ceased operation around 1960. The windows settings are Indiana Limestone; the alter rail, pulpit furniture, organ and choir fronts are San Domingo mahogany; and the pews are the finest quartered white oak. The sanctuary design is arranged on the “Akron Plan” that groups worshipers around a center pulpit.  The original pipe organ, built by W. W. Kimball Co., of Chicago, had 910 individual pipes and 14 ranks. The originally pneumatically operated but later electrified. It was replaced in 1968 with a custom-built Moller Pipe Organ with 1092 individual pipes, 20 ranks and chimes.

Large restorations/renovations were completed in 1939, 1957 and in 1968. A new education building adjacent to the church structure was completed in 1962. Additional renovations include installation of a handicapped ramp in the front of the building, central air conditioning in the sanctuary and a handicapped lift and handicapped rest room in the church building. A massive restoration/renovation began in 2001 and included a complete upgrading of all electrical, plumbing, heating and air conditioning systems and a modern sound system. New protective materials were used on the walls to shield the plaster from moisture. A major feature included conversion in the Memorial Hall with cabinets for historical displays and the creation of a Heritage Room for permanent historical items.

The celebration of one-hundred years of worshipping in the sanctuary was on June 16, 2002. Most of the Sanctuary is void of religious symbols except for the stained glass windows which were made in the studio of the well-known artist Wm. Reith of Philadelphia. Each window records a message from the scriptures. The south window showing a man plowing a field is marked: “The earth is the Lord’s and the fullness thereof.” The north window showing fishermen in a boat is marked: “The sea is His and He made it,” – an appropriate selection of Havre de Grace as the “River City.” The west window, showing Jesus with the lost lamb, is entitled: “I am the good shepherd and know my sheep.” Other stained glass windows carry out the building’s architectural design. The only other religious symbol is an open Bible carved in limestone and opened to Psalm 117, above the outside front entrance. 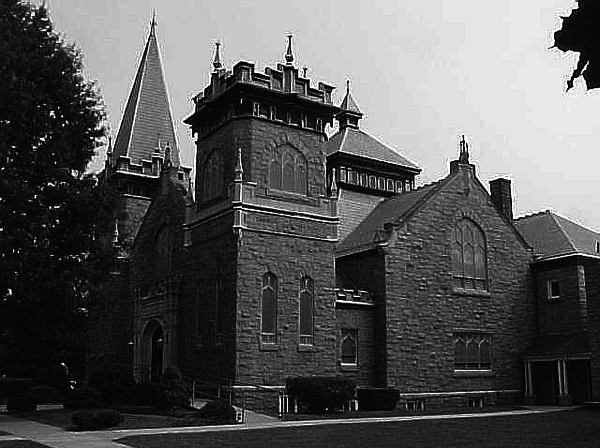 Artwork throughout the church combines German and French art forms. The window over the north choir door is a fleur-de-lis French national emblem. The elaborate decorations in Victorian style are unusual for a protestant or United Methodist congregation and are seldom seen outside of large eastern cities. This church, with its architecturally-historic significance and restored beauty, becomes more valuable over time as other examples of an earlier period are destroyed or otherwise disappear. The Church is a designated building in the Havre de Grace Historic District.


With us for many years, Debbie is a gifted organist, and directs... (more)